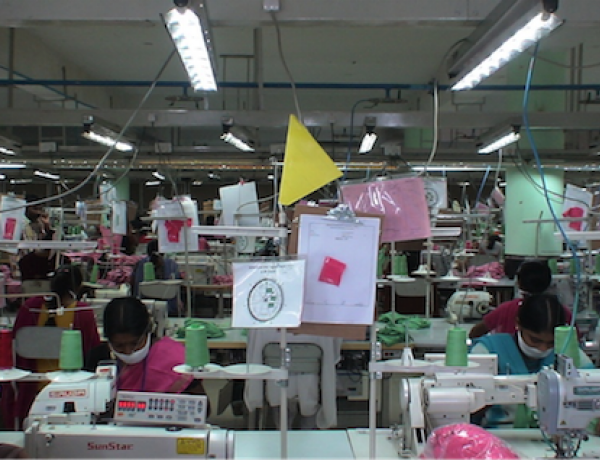 Shahi Exports Pvt Ltd. started in 1974 at Delhi and Bangalore operations began on 1st July 1988 with 250 associates and 104 machines. With manufacturing units located across India, Shahi manufactures 3 million pc of high quality wovens & knits per month and caters to all segments in the apparel industry.

Shahi was suffering from a Low Value Addition Ratio, and called us in for an initial Kaizen event. It turned out to be such a success that they wanted more. The director of the company asked us to focus on organizational development and make improvements to the work culture.

We started off with a 3 day Vision workshop attended by over 40 participants from the company. The vision that emerged was encapsulated in a single statement – Shahi can be Number 1 in India. Our initial step to making this happen was to run an alignment workshop. Following this, we plunged into turning the company production line into a Single Piece Flow.

In simple terms, this meant that instead of the typical batch processing of garments, each garment went through all the stages of processing, one by one, until the finished product was created. Immediately, we began to see higher quality products, less accumulation of garments, and less WIP. The result was so successful that it led to a culture shift on the shop floor; all lines moved to single piece flow, and the director himself took ownership of one of the lines making it a role model to replicate across the Knits division.

The division also worked on a Back-to-Back operation, which we turned around. By replacing this operation with a Face-to-Face, we gained immense space on the shop floor which led to 66 lines expanding into 133. Capacity, of course, sky rocketed.

Another practice that we implemented was Cut-to-Pack. This practice brought together all the different processes in garment manufacturing into the same space, which resulted in drastic improvements in quality and production and minimized delays in movement.

Our work in Shahi generated tremendous insight into the garment industry. The shifts in production that we enabled were eventually deployed across the entire Knits division, creating a revolution within the apparel industry. Over the years, Shahi gained a place of prominence in the industry and has maintained their impressive record of creating high quality products while sustaining growth.

The Drive to Transform