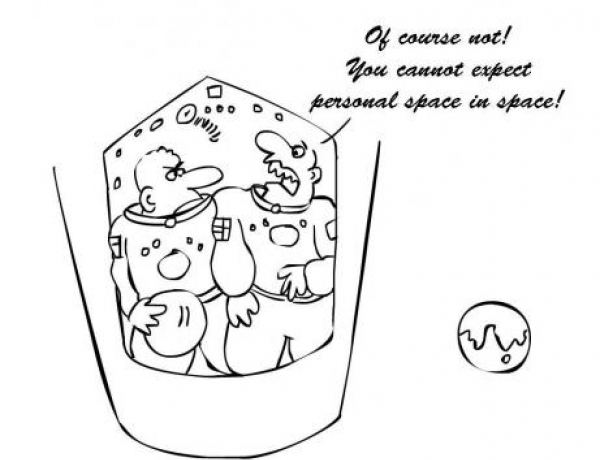 I am not a fan of science fiction. But that has not stopped me from following almost every foray into space with fascination and wonder. The surging power that announces the lift-off of a space-craft, the images beamed from miles above in space, the narratives of those in the thick of it all and of those who have been in the vast expanse of space, the touch-down, the relief followed by elation – all of these I have taken in innumerable times. Each time has been much like it was the last time – sitting glued to the screen, clinging to every word, not wanting to be disturbed, vicariously engaging in epoch-making exploits, acts of courage, bravery, passion and adventure. The daughter thinks I am “nuts” and the wife believes I am wasting time. She calls my arrested gaze at such spectacles infantile.

I have often wondered what it might be to be stranded, lost, abandoned or simply too sick in deep space. No place to go, no one to talk to. No time to ponder. Ponder over what? Was it at all necessary? I wonder if similar thoughts cross the mind of those who embark on these perilous odysseys into space. Did they renew insurance before they got into their space suits? Did they carry cyanide? Did they leave behind letters…just in case…?

Months of preparation, long hours of practice, numerous drills, many hours of poring over details – over and over again – checking every little code of programming, dry runs, simulations, an army of dedicated crew scanning every microscopic detail, millions pumped in to fuel a dream of space stalkers and their sponsors – all of this to proclaim the indefatigable human spirit, to assert supremacy on this earth and stake claims to discovery. The scale of collective, collaborative endeavor on matters such as this – otherworldly, one might say – speaks of capacity, resources, will and curiosity.

It speaks also—(on a more cynical note)—of power, greed, politics, profits, insensitivity to the perils that presently engulf us and a desire to lead the march into space without satisfactorily demonstrating credentials to grapple with the sorrow, sufferings and opportunities on Earth.

When much of the world stays transfixed to images of a space accident beamed uninterrupted for hours on end (except of course for the all-important commercial breaks), listens to world leaders paying tributes to the space travelers’ exceptional blah-blah-blah, all the world’s worries over hot spots suspended from the mind, one is deeply saddened and later, inexplicably confused.

We are instantly led to term it a “disaster”. What makes it one? The investment that disappeared in a flash? The loss of lives? The dream that went up in smoke? That there was an Israeli, the first one ever? That there was a woman, an Indian? I believe that the people who lost their lives embodied, at least in part, the yearning of all mankind to surmount their limitations and leave an imprint of their heroic deeds: in discovering the mysteries of the world, discovering something of themselves. Strangely, one realizes how intimately we are connected.

It is an insight that reveals itself, alas, only sporadically, in the peak experience of tragedy and triumph. When amplified externally or by the mind, we feel our pumped breath crash the rib cage and remind us that we are living beings.

We seem to need such moments of high drama to restore to ourselves some of our deeper sensitivity. Perhaps all the drum beating and the hype have to do with the fact of our anaesthetized selves. If we were less closed and more sensitive, we surely could be a lot more discriminating about a whole host of things, notably goals, means, causes and consequences, and not to forget, cost-benefit.

All of which brings me to ask if being pulverized in outer space is in some ways nobler or worthy of admiration than courting death in certain other ways. Driving to work in my car, I daily observe overcrowded buses leaning to one side as they struggle to move on, people heading to work clinging to the drooping sides with barely a toe on the footboards, one hand clinging to the railings on the sides and the other clutching their bags. This is a very dangerous daily commute, and casualties have been known. For many of the young college goers, however, it holds the thrill of the forbidden, of courting danger against all advice, of asserting their fledgling manliness through defiance of rules. For most others, there is little choice. Life hangs in balance in the socket of their shoulder joints – every day. They do not put their lives on the line to pursue some esoteric ambition or to indulge some leisure time impulse for adventure. These are bread and butter stories that don’t make good copy, nothing to write home about!

Millions die of disease, hunger and starvation every year. As humans, we face a huge challenge on Earth, to offer a fighting chance to our own kind to live. There is enough and more for [men and women to surmount and overcome, in the field of food security and medicine. There are thousands who die every year in war and strife, pointing to an inner voyage that man still has not undertaken on a grand scale to conquer greed, jealousy, envy and hate. There is still the challenge to collaborate effectively as individuals and nations to counter-weigh the competitiveness that pits man and country against himself and others…and this Earth. There is still the challenge to preserve, protect, promote and cherish all life, not glorifying those who sign up to kill or get killed; to value life because it is precious and not because it is American, British or Jewish; to honor all the dead because they graced this Earth and left valuable lessons with their deeds and misdeeds and not the celebrated few because some arbitrary scale devised by the limitations of man declared them more worthy than others.

So did the passengers in Columbia die in vain? Perhaps not. In their fiery death, they have brought attention to the spectacular strides made in some areas. They remind us of the awesome talent and courage, capabilities and collaboration that so many are capable of. This leaves one hopeful that someday in the future, this strength will home in on some of the more intractable and vexing problems on Earth and achieve spectacular success and make this Earth truly ready for distant lands across Space.